MONOLOGUES: Human and Biophilic Expression in Design
< View all news

Human and biophilic expression can play a significant part in creating spaces that offer people a new experience, allowing them to engage with the built environment in a way that they may not have done before. In this piece, Architectural Assistant Mankiran Kundi, explores how the two worlds of human and biophilic expression can be combined to create places which are more beneficial for both the end user and the surrounding context, and discusses her final year project from university as an example of how this can be achieved. 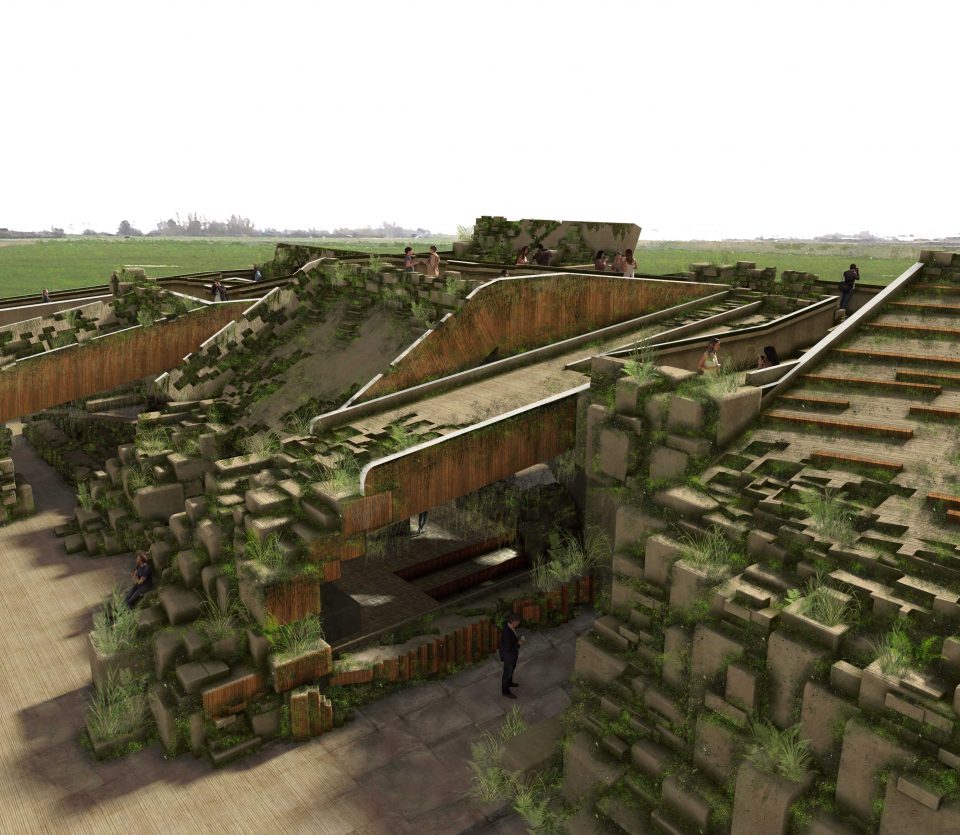 “An object of observation can be, in a number of different ways, partly natural, partly artefactual and something that is a natural object might nevertheless not be in a natural state” – Malcolm Budd (2002)

The above by English philosopher Malcolm Budd describes how we might engage and appreciate natural objects. It alludes to the ideas that even if the origin of an object is natural, if it is not in a natural state then it is not appreciated as such.

Do we ever consider the reverse? If the object is a human artefact and is in a natural state, can we begin to appreciate it in the same way as we might appreciate the natural world?

This can be seen with the effects of natural phenomena, such as erosion, staining, and flora propagation, which constantly alter the buildings and places around us. Despite this, we invest time, money and energy in design and maintenance strategies for the consistent removal of these natural processes and consider alternative ‘green architecture’ options to bring nature into the spaces when it was already there to begin with.

In places we design, architects and designers should be inspired to engage and reflect in a more responsive way to natural phenomena. Biophilic expression plays an important part in achieving this and highlighting the innate affinity people have to interact and be close to different forms of nature, which evoke a sense of familiarity.

With a growing role in the world of design, biophilic design is a way to improve quality of life by reconnecting people with nature and their environment. It is becoming an increasingly key design tool post Covid-19 due to changes in the way people now want to live and work. The integration of plants, light, water and other natural elements in interiors and spaces positively affect people’s wellbeing, perception of space and has been found to enhance healing, recovery and cognitive functioning.

The concept can also be applied to architecture and exterior facades, improving the urban landscape from a steel and concrete setting to a greener one, where buildings seamlessly fuse with the natural elements around them. The Barbican Centre in London is one such example of this with its brutalist architecture being integrated with greenery, wild vegetation and water.

All spaces have a natural state which captures both human and natural forms, allowing us to understand and connect to places. The evolving conditions of a space portray human expression as an area is utilised to meet their artistic expression. It is an everchanging process which inspires people through the urban environment, provoking thought, promoting events and inspiring creativity. This human expression creates a natural state which can be designed alongside biophilic expression, merging the two worlds.

This drive to capture the visibility of the surrounding environment and context into designs is vital to eliminate the notion that we are separate to the natural world. By exploring architecture’s role with ecology and creating space that engage users’ imaginations to consider their sense of place within the biosphere, architects and designers can begin to bring nature to the forefront of design and make it a necessity.

This is pertinent for Rye, East Sussex which is situated two miles from the sea and at the confluence of three rivers and was the inspiration for my final year project at university. My project, ‘The Revitalisation of Human and Biophilic Expression’, was guided by biophilic design, by aiming to bring nature closer to human use which is currently a distant relationship keeping the two worlds separate. I explored how the moss propagated roofscape of Rye can be brought closer to the people, residents and visitors of Rye whilst also combining it with a form of human expression to further enhance people’s wellbeing.

The design focussed on how moss propagation could be encouraged over the years of use and aging, through the understanding of growing conditions and environmental impacts. This encouraged nature-based spaces whereby users could have a more intimate relationship with man-made architecture in its natural form.

The introduction of spaces like the ‘exhibition box’ were key in bringing the two worlds together. In the project the ‘exhibition box’ was an open space designed for human expression and was a vital representation of natural and human artistic change. As the space was utilised more, human expressions were discovered and altered, specifically using graffiti as a form of self-expression. Denser biophilic growth was visually impactful as the two expressions merged. As this growth evolved it responded to the wider natural environment and how the proposal endeavoured to develop novel aesthetic sensibilities of what ecological architecture could be beyond its current offering. 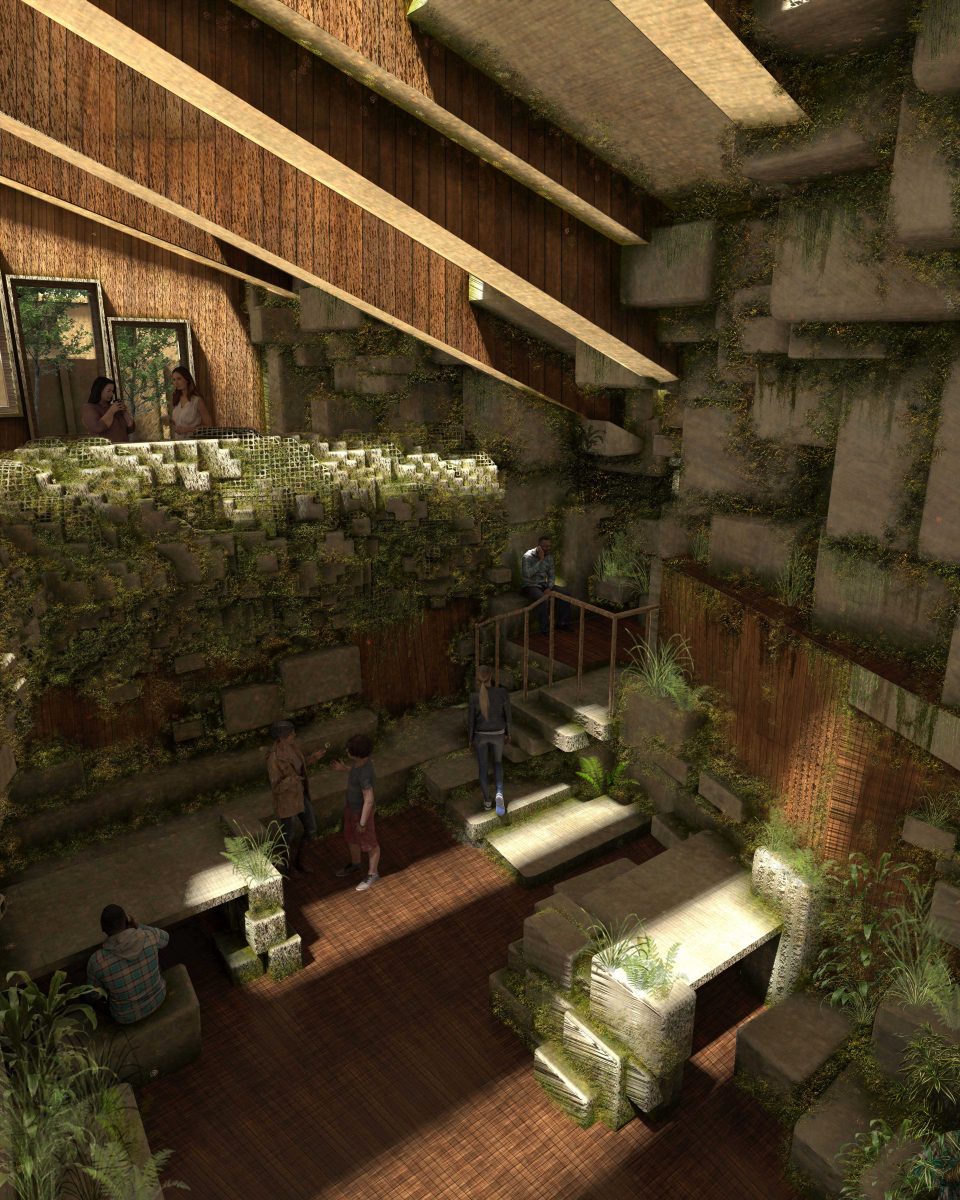 Scientists have proved that humans have a deep subconscious affiliation with the natural environment with biophilia becoming an important topic in the wellbeing debate. Incorporating nature into spaces such as the workplace delivers significant benefits including cleaner air, reduced stress and enhanced mental health. This improved state of mind brings with it increased concentration, creativity and even a reduction in absenteeism.

JTP has been embedding the principles of healthy placemaking across all our projects to ensure out designs have a positive impact on the everyday lives of communities we design for. It was therefore essential that our own studios reflect this ethos given that we spend a great proportion of our lives at the workplace.

In the process of designing JTP’s new London studio, the ideas and concepts of biophilic expression were key in creating a workspace that was healthy and benefitted occupant wellbeing. As such from the design evolution, the plan was to incorporate large-scale planting throughout our studio in key locations, where staff could easily see or be close to the greenery.

Plants and shrubs in our London studio were selected for their robust forms, with large simple leaf shapes and varied canopies. The integration of biophilia and densely planted areas provide not only air purification but also spaces of contemplation, helping to further improve the productivity and cognition of our team.

On JTP’s outdoor terrace which faces onto a construction site for the regeneration of the London Docks, plant species were chosen that could respond to and withstand the hostile environment helping to further encourage biodiversity and the greenery of our studio space.

Through biophilic design principles the built environment can seamlessly establish a transition from inside to outside, creating an opportunity for a dynamic shift, and an ever-changing experience of the built environment. This can be either as amenity space in residential architecture or by creating community spaces for nature enhanced experiences.

We as designers should be creating a connecting experience with nature that grows and develops over time to make our environment more beneficial for user wellbeing. This design ethos would also assist in dissolving the notion that we are separate to the natural world that we live alongside, and rather we should be inviting it into our homes and the places we create, rather than leaving it as a secondary afterthought.

JTP is committed to ensuring that your privacy is protected. Should we ask you to provide certain information by which you can be identified when using this website, then you can be assured that it will only be used in accordance with this privacy statement.

JTP may change this policy by updating this page. You should check this page from time to time to ensure that you are happy with any changes.

What is a cookie?
A cookie is a simple text file that is stored on your computer or mobile device by a website’s server and only that server will be able to retrieve or read the contents of that cookie. Each cookie is unique to your web browser. It will contain some anonymous information such as a unique identifier and the site name and some digits and numbers. It allows a website to remember things like your preferences or what’s in your shopping basket.

What information will JTP collect about me?
Information about your visits to and use of this website (including your IP address, geographical location, browser type and version, operating system, referral source, length of visit and page views). We collect this information in a way which does not identify anyone.

By sending us your details you consent and accept that it may be necessary for us to forward these details within our organisation electronically or in other formats.

JTP will never share your information with other organisations for marketing, market research or commercial purposes.

All modern browsers allow you to change your cookie settings. These settings will typically be found in the 'options' or 'preferences' menu of your browser. In order to understand these settings, the following links may be helpful, otherwise you should use the 'Help' option in your browser for more details.

Useful links
If you would like to find out more about cookies and their use on the Internet, you may find the following links useful:

The Internet Advertising Bureau (IAB) UK has provided the following website to give information specifically about privacy issues around Internet advertising: youronlinechoices.co.uk/uk

For further legal information about privacy issues, you may find these links useful:

No content may be copied, stored, manipulated, published, sold or reproduced in whole or in part in any form without the prior written authorisation of an authorised representative of JTP. The supply of any content to any third party is prohibited.

As copyrighted material, all content in this website is protected by copyright, intellectual property and all other applicable laws of the United Kingdom and other countries worldwide.

Any redistribution or reproduction of part or all of the contents in any form is prohibited other than the following:

You may not, except with JTP’s express written permission, distribute or commercially exploit the content. Nor may you transmit it or store it in any other website or other form of electronic retrieval system.